There's nothing in your cart yet.

Subtotal:
Checkout as Guest Check Out as User 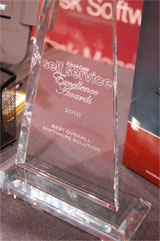 The AT&T Experience Kiosk Project that we developed with Ipsh and Arc Designs won both entered categories in Kioskcom’s Self-service Excellence Awards!

The project is a custom software application that we developed for the AT&T Center in San Antonio, Texas. It integrates a mobile marketing campaign with four self-service coupon and prize redemption kiosks to create an end-to-end interactive consumer experience. Through a video board message, fans are asked to participate in contests or sweepstakes where winners are notified via text how to redeem their prize from the self-service kiosks.

The secondary purpose of the kiosk stations is part of a photo marketing campaign. While fans are attending an event at the AT&T Center, they can have free souvenir photos taken in front of a team-inspired backdrop. The photos are then wirelessly uploaded to the web, enabling fans to retrieve the photos at anytime after the event. Or fans can immediately retrieve their photos, using the free on-site printing provided at the kiosk stations.

Thank you for reaching out to the KioWare Team. We will get back to you as soon as possible.

We apologize for the inconvenience. Your email failed to send. Please try again or email us directly at sales@kioware.com.